How did I get here in radio land?

How did I get here in radio land?

Back in 1989 – 1993 I was able to save up and take off with my bicycle and spend a few years traveling around the world, through China, India, South East Asia and Europe. I was able to subsidize my traveling and live the “Yukon dream” by spending 6 months on the road buying up trinkets and handicrafts and then spending 6 months gypsying around the north at music festivals selling my stuff at flea markets.

I started to dabble in taking stuff back overseas for trade and tried salmon, maple syrup and cosmetics with mixed results. Eventually, I got a bit more organized to assist locals overseas to market their goods here and export back as a China Trader. 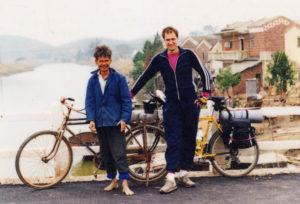 My home was and still is Tagish, Yukon located 120 kms south of Whitehorse. Back in 1984 there was no phone service here except Manual Mobile radio (Handy Talkie) and HF, not exactly modern and none of it supported full duplex faxing. Internet was not available to consumers, restricted and known as ARPNET.

My business continued to grow, and I would have to drive to Whitehorse to send a PO with instructions to my colleagues on the other side of the world. Inevitably, the fax wouldn’t be on at the other end, and I’d have to drive in the next day, back to Whitehorse to send the fax. There had to be a better way, rather than burning fossil fuels and wrecking my car. The idea of TagishTel was born.

In 1992 I switched career paths. With little technical background or training, I got myself hired by an SMR Radio\ Pager shop in town and joined the local HAM club. I scrimped and saved, begged permission (for years) to locate equipment in a Yukon Government communications building, bought some decommissioned full duplex radios used from lighthouses on the west coast, and bought some new expensive interconnect equipment. I went through the dumps, scrounged whatever I could, remanufactured connectors and bought transmission line from the scrap yard. On Oct 11, 1996, I placed my first call to Whitehorse from my home in Tagish, with just a regular phone plugged into to my mountain top radio link, and sent a fax overseas, via a house in Golden Horn, Whitehorse, where I interconnected to the Telco. 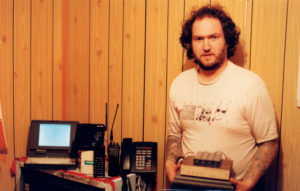 That was a very expensive first fax!

I made a presentation to the CRTC the following spring, and was interviewed by the media about my telephone and fax solution.  Bell Canada wasn’t impressed because they had been saying publicly for years that “it couldn’t be done” without millions of dollars of subsidies.  Here I was, grade eight education, with a bunch of recycled stuff from the dump that they trashed and wasted, to connect our community to Whitehorse.

That summer I went back on the road to the music festivals and flea markets peddling my “shrunken heads and silk scarves”. People recognized me from the media, and said they wanted a fax\telephone system like I had made in Tagish. I offered to give them a deal on silk clothes and shiny dragon stickers, but again they asked for communications systems. Eventually, I got the hint that there was more money to be had in supplying telephones\fax, and supporting the recent service called the internet. I learned and crafted various business models about the importance of communications in emergencies to warn of fires, flooding in the southern lakes, chemical spills and lost children in the bush. Later, I built a large area wireless broadband link connecting Tagish and Marsh Lake with multiple hops and mountain top sites.

Being an inquisitive mind and inventor\entrepreneur, I thought “what else can I do?”  When I was flying over northern China, I could see little villages connected by a road, and these would connect to a city, and carry on to more villages. “What could I sell to these people?” The old saying is “you only have to sell a single toothbrush to everyone in China once to be set for life.” 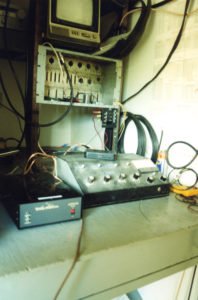 106.7 radio txer with old board from Ross River YT. First song I played on this “new” board was Windmills of your Mind for Margret Thomson

I had always been fascinated with radio, and loved listening to Old Time Radio and Electric Light Orchestra. I had the radio trade figured out, and bought a 5 watt “talking sign” FM radio that was then manufactured in Whitehorse by Total North. I launched this radio service on Labour Day weekend in 1997, and have been on the air ever since. I started off playing some LP records, got a tape deck, and rebroadcast the signal of CFMI Rock 101.1 from Vancouver BC. A couple of years later, I moved my stuff to a mountain top, upgraded to better equipment, and built up a following.

Eventually, I got around to applying to the CRTC for a licence, instead of remaining as an “underregulated” station. Big, long, drawn out saga ensued. They won one year. I won another. We eventually decided to work together, and I’m now in their good books on Monday, Tuesday and Wednesday. If its a long weekend, then Tuesday is OK. If it’s a call on a Thursday, that usually isn’t a good day for anyone. It’s complicated. We still talk and love each other, but I’m still not so sure about Thursdays :-\

CRTC had all kinds of questions: “How would I make my studio available to the public for community programming?” ” How would I assist in an emergency?” ” How would I make it sustainable and be an equal opportunity employer?” ” How would I pay royalties on revenue in excess of 1.25 million dollars?” I had trouble with these questions. Tagish was only 150 people (less in the winter), my studio was a small cabin, I didn’t have stairs, my driveway wasn’t shoveled in the winter. I wasn’t even here most of the winter, as there are zero job opportunities in Tagish, and I had to go elsewhere to work.

In those days, there were only 3 radio stations operating in the entire Yukon: coming out of Whitehorse, CBC North AM 570, commercial CKRW AM 610, and indigenous CHON FM 98.1.  I had spent time around CKRW in the eighties while running a second hand record shop, and saw the way WHTV Cable was run, by flying in boxes of video tapes from outside, and manually playing these on multiple cable channels.   CKRW later updated their radio station system to a big CD Changer digital jukebox, when I asked the manager at the time about technology and remote access.  They advised that the challenge was to be able to switch the control room between LIVE feeds from around Whitehorse, remotely by the on-air talent, without having a person doing this on standby at the studio. This solution would reduce costs to manage LIVE broadcasts, and be a solution other stations would be interested in, and that I shouldn’t call back expecting a sale 🙂 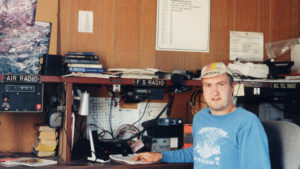 I had done some work with emergency broadcasting when I worked for Haines Junction Forestry service, running communications while coordinating 200+ ground personnel and 5 big helicopters. It was here in this large camp that I was assigned the handle “RadioRob”.  I saw a big push for innovation funding to diversify the resource extraction economy, and took a stab at getting some $$$ to develop a web based radio system to run emergency messages and public service announcements for export to African villages, using inexpensive FM radio as the last mile for delivery of community information to be received with Trevor Bayliss wind up radio.

This was a bit of a hard sell. Why wouldn’t the people in Africa just hop on the internet, learn how to avoid AIDS, and how to plant crops? It took some explaining that the entire village, even if they had a radio,  couldn’t afford a single battery. My thoughts were to use the Bayliss Wind up radio as the last mile end user device.

Being persistently patient, I got a bit of seed money to develop a prototype of a web based open source “Radio Station in a Box” from the Yukon Research Centre, and hired & mentored Yukon Youth to help design and build this as a Made in Yukon solution. I was very lucky to come across some real talent, and scrimped and saved, with all the development money going into the project called OpenBroadcaster. I supplied the gear, filled out the forms, setup CJUC 92.5 FM in Whitehorse, and hooked up the system with some volunteers to help monitor it. It hiccuped, it broke, it crashed, it flopped, but something started to come out of the radio speaker, though, at first, it was very faint and garbled. I kept at it, learning as much as I could about things that were way, way over my head. I got some paying work, and saved up a bank roll, so that I could go on a holiday, and over Christmas 2004, I went back to Toronto to visit with family. The night before the plane left, I did a backup of the music library, and thought it was so cool that I had finally figured out how to do this in Linux, and that all this would be happening while I was inflight. I got to Toronto, it hiccuped, it crashed, it broke. 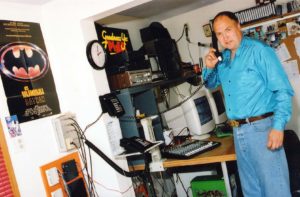 The Tsunami happened on December 26, cheap tickets were to be had, and I had a bunch of cash to go back to my former vacation spot in Nan, Thailand with a passport and entry visa. With friends waiting for me on the other side of the planet, I got on a plane and arrived back in the Yukon to -40 C weather. I bought a bunch of Kraft Dinner, and sat at home, trying to figure out how to get the radio project working. I knew if I had left for Thailand the momentum would have been lost, OpenBroadcaster would have died, and it would’ve been really hard to get the ball rolling again. So it was a good thing I came back, because that file backup I did really screwed things up, with Tagish Trumpeter swans honking and playing non stop in a loop on CJUC for the entire 2 weeks I was gone, and no one had the keys to the radio room. I figured out what was happening with the messed up code, and got OB Ver1.0 up to something resembling stable operation. Things picked up. Bill Polonsky, the station manager at CJUC FM “The Juice” had volunteers signing up and running lots of cool radio shows through our web system. Then OB Ver 2.0 got off the ground, supporting multiple remote stations, along with images to a community TV transmitter. 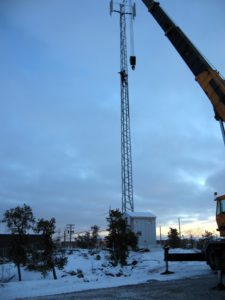 In 2008, OB Ver 3.0 saw a very talented programmer fall from the sky, and with them, some development money. More stations got involved,

AJAX, JSON and jQuery entered the vocabulary, a solid multimedia broadcast framework was born, and with it came real stability on a solid foundation. In 2011,  OB Ver 4.0 was  built, while I spent 5 months in China with a full blown API, Module support, Themes and a kick ass remote player application supporting unattended emergency messaging across all media. In 2014, a touch screen LIVE Assist mode on a mobile HTML5 framework was added.

I don’t even know what OB Ver 5.0 is going to look like, or what it’s going to do. I do know that I’ll be having fun chasing that dragon, meeting some great people along the way and pushing the envelope.

The rest, as they say, is history.